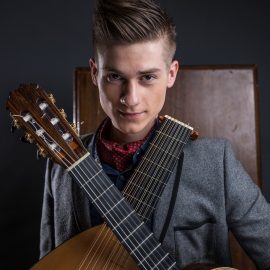 Guitarist and lutenist Jonas Kublickas recent performances include recitals of solo and chamber music repertoire at the New England Conservatory of Music, Boston, MA, the Boston University and all throughout the Massachusetts area. He is especially interested in reaching out to new audiences and plays regularly with several early music and contemporary groups that perform in alternative spaces. Jonas has recently performed at Gwangju World Universiade closing ceremony in South Korea, a botanical garden, Isabella Stewart Gardner museum and Seoul National University.

Native of Vilnius, Lithuania, Jonas won The Baltic States Guitar competition. Jonas began his music studies on classical guitar at the age of 11 and first picked up a renaissance lute in Salzburg at age 19. He says, "It was the magic of plucking and strumming that got me hooked!" At the moment he is adapting himself to the lively and unique performance venues of East Coast performing in New York and Boston areas.